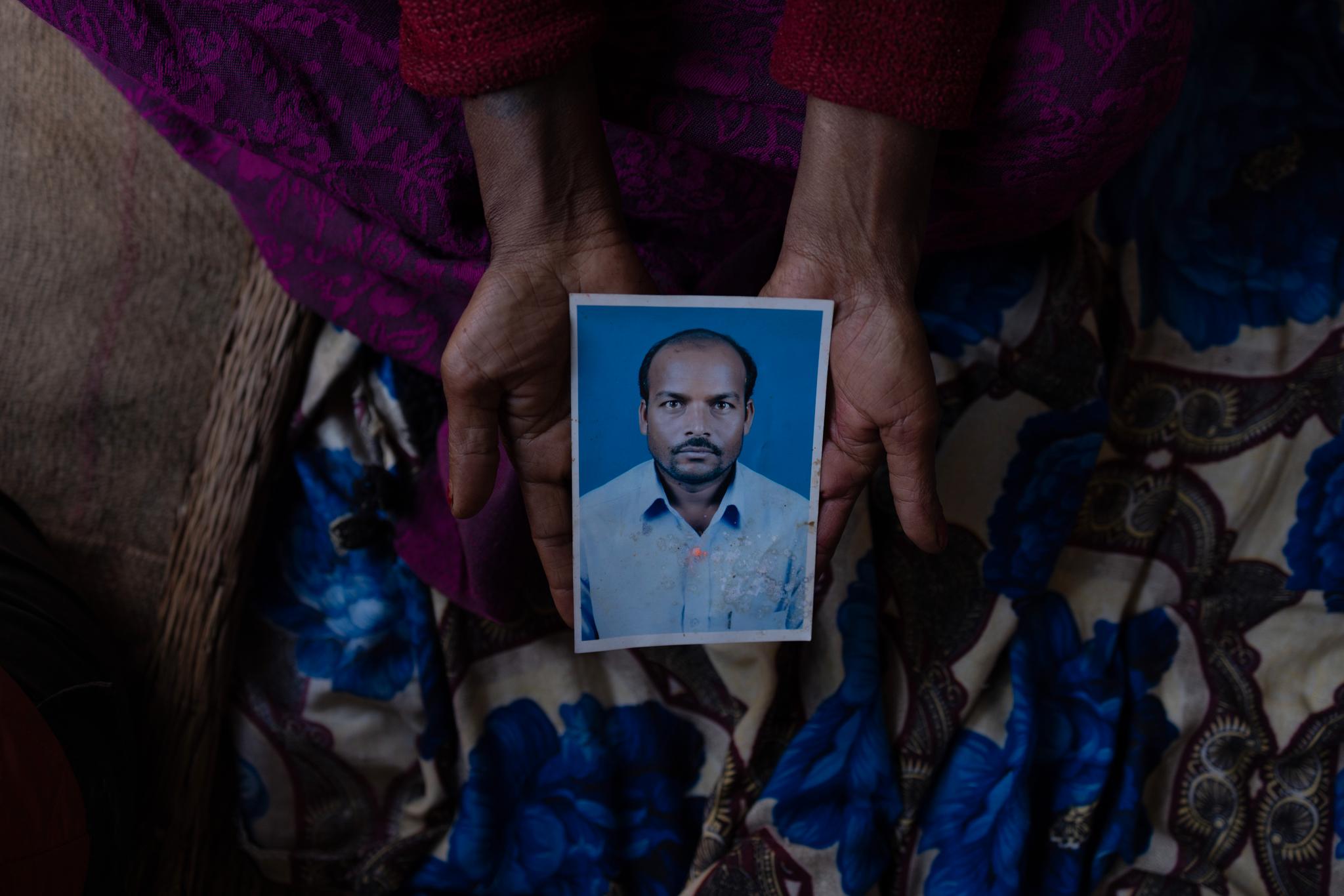 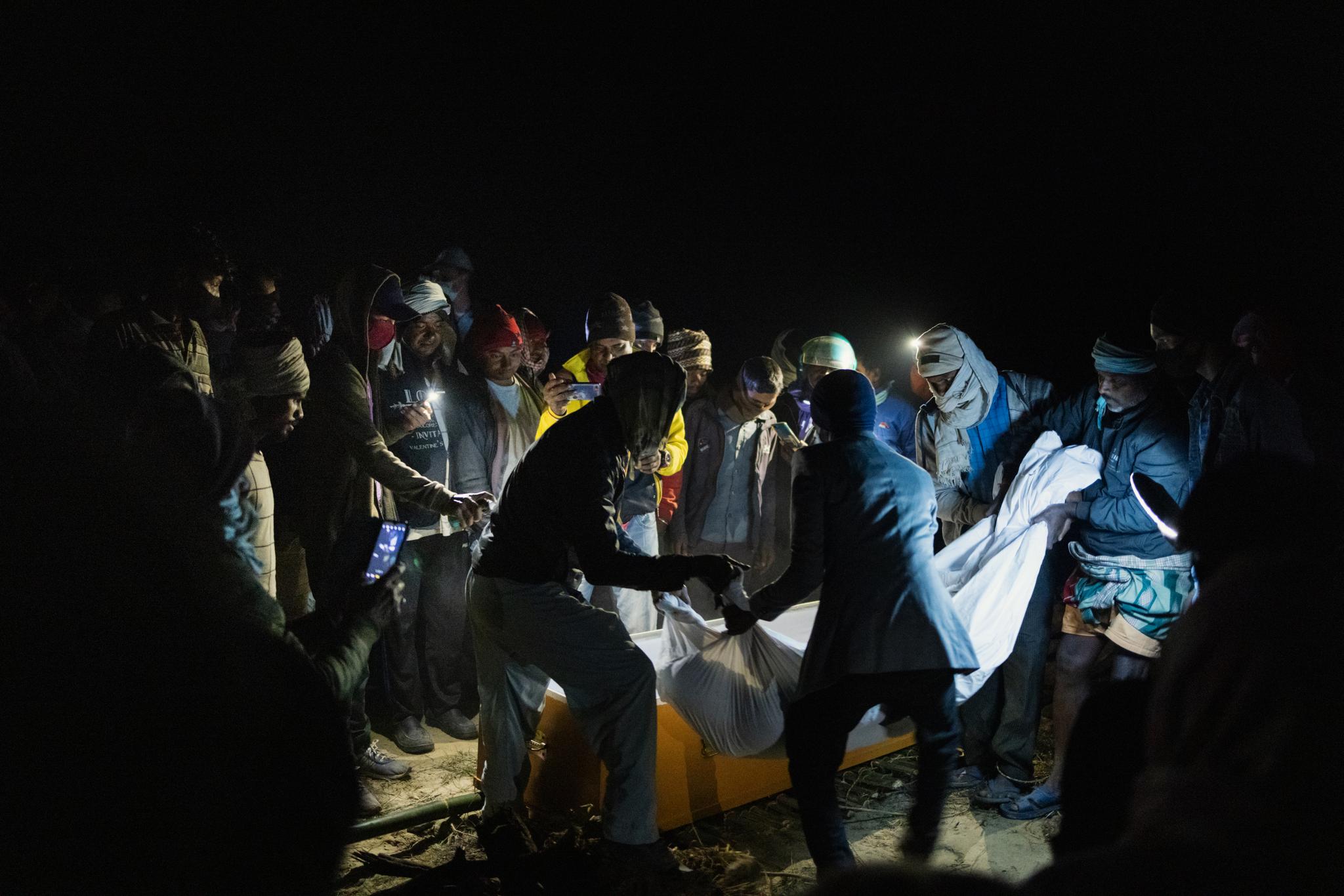 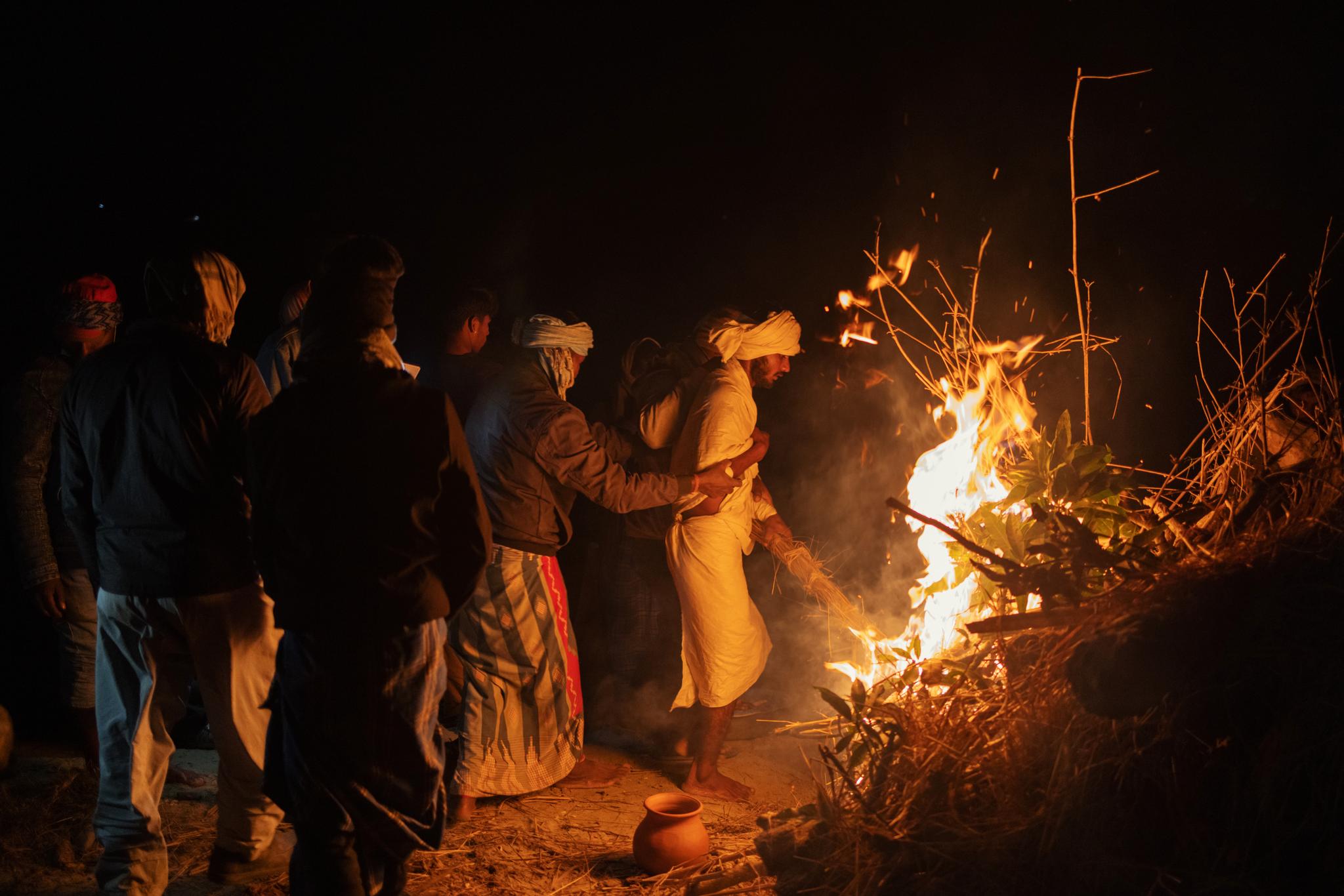 Bhogendra (44) paid the highest price of all for the World Cup in football.

The construction worker returned to his family in a coffin.

These VG photos show the darkest side of Qatar's World Cup dream.

One day almost three years ago, 44-year-old Bhogendra Mochi left his wife and four children at home in rural Nepal.

He gets on the plane to Qatar.

From all over Asia, millions of workers travel to the small kingdom at the bottom of the Arabian Peninsula - to build the country.

Since Qatar was awarded the football World Cup in 2010, accusations of corruption have been pouring in, including from the US authorities.

The organizers have denied the accusations.

And now they are short on time.

The migrants are working in high gear to complete all the new stadiums, hotels, roads and metros.

He will never see his own family again.

At nine o'clock in the evening we still hear the sound from all the drilling rigs.

In every quarter we pass, there is yet another open hole in the ground, with men in blue overalls and yellow reflective vests close together.

Before the nation found oil and gas, Doha was a desert city.

Now the capital has newly asphalted streets and skyscrapers with shiny glass facades.

The large-scale venture has not only the World Cup as its goal, but also what Qatar calls «Vision 2030» - a revitalization of the country.

But it is not the country's native inhabitants who do the heavy lifting.

95 percent of all workers in Qatar are migrants, according to Human Rights Watch.

Just before New Years eve this year, Bhogendra works on a construction site in the city centre, where new hotels will soon be rising into the sky.

It should be ready for the football World Cup, according to several contractors' websites.

Sources VG has spoken to describe how he carried heavy cement sacks up and down the building.

– On the video call, he showed that he climbed very high. It was around 3pm, Tara Devi Mochi (41) tells VG.

– It was really loud. I was afraid that he would fall, says the wife.

A few hours later, she tries to call him back.

She learns that Bhogendra has fallen and has been sent to hospital.

The next day she gets in touch again. The message is shocking:

Her husband is dead.

The employer has subsequently stated that Bhogendra died after a collapse - and not from an accident at work.

Last year, The Guardian revealed that 6,500 migrant workers have lost their lives in Qatar since the country was awarded the World Cup.

Human rights organizations have pointed to heat stress as a possible reason for the unusually high death toll.

The authorities in Qatar have rejected the criticism and claimed that the deaths are natural.

At two o'clock on the night of January 7th, a Boeing plane from Qatar Airlines is parked on the runway at the international airport in Doha.

Two reporters from VG are among the passengers who find their seats.

Bhogendra's casket will also be on this plane.

– Do you know if there is a coffin on board? we ask a flight attendant.

– What do you mean? We are not transporting any coffins today, she says.

A few minutes later she returns. She has spoken to her captain, who confirms that yes, there is a coffin on board.

– Send my condolences to the family, she says. 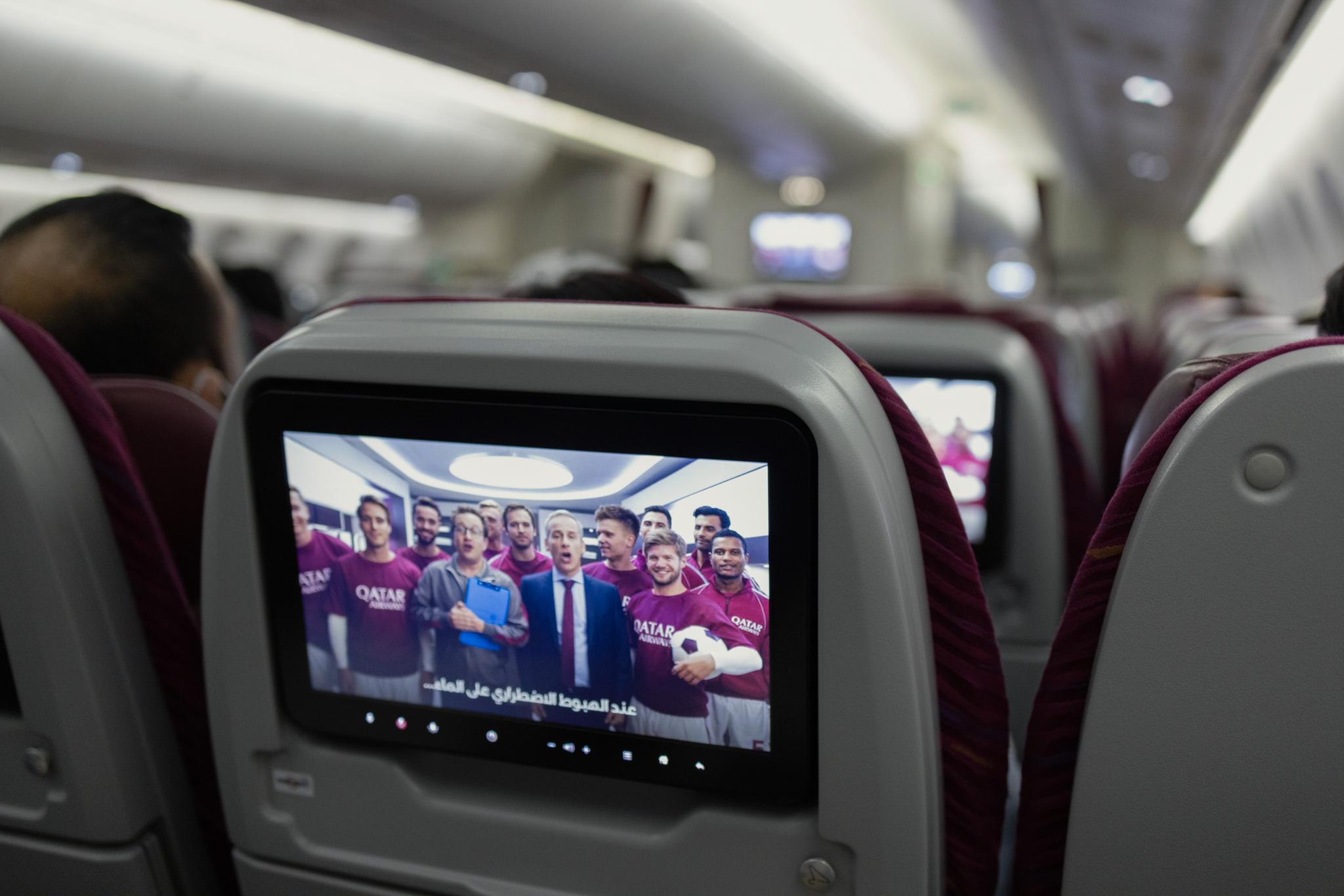 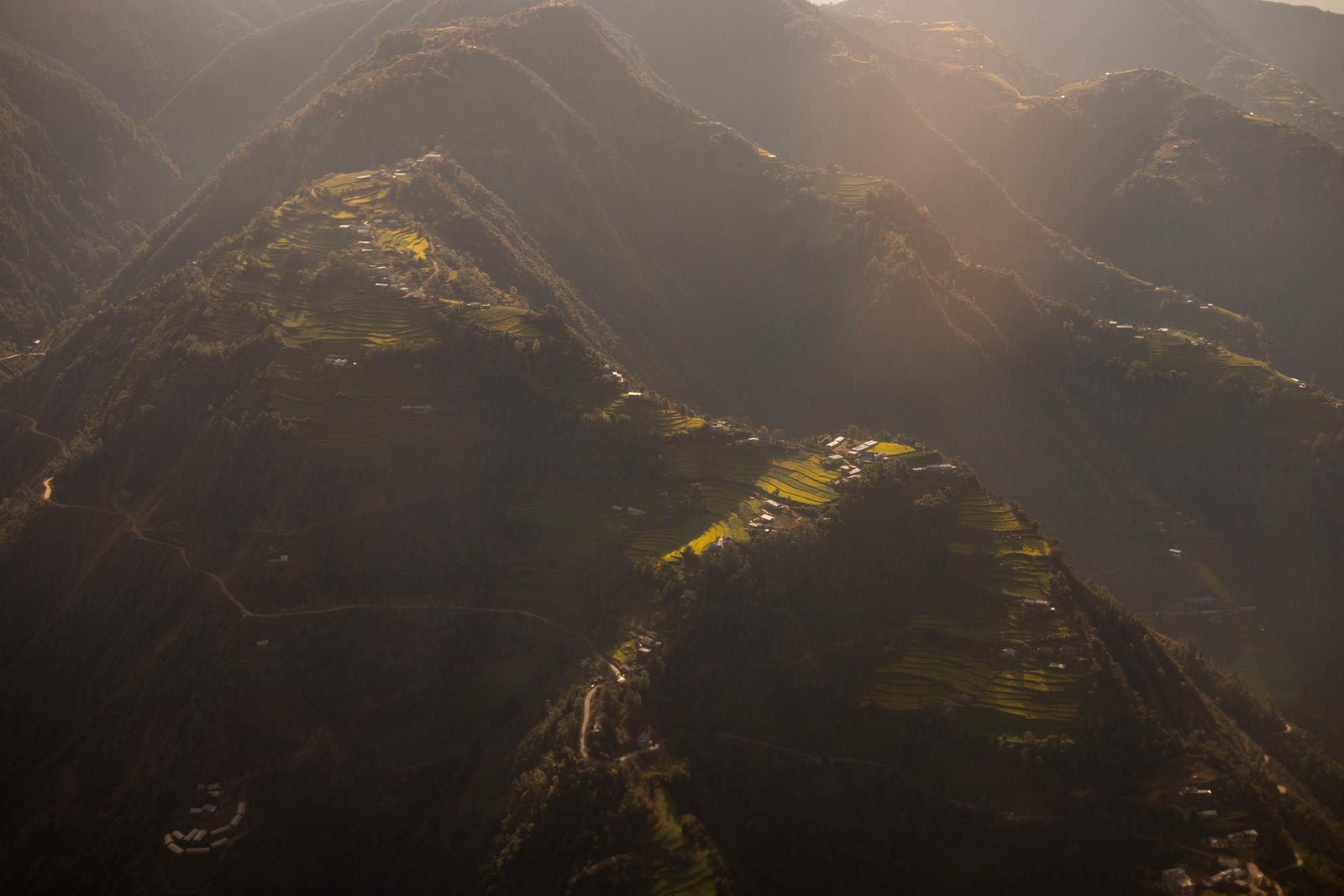 On the screens in front of each seat in the cabin, the advertisement for the football World Cup rolls.

Every day, four deceased foreign workers are transported home to Nepal, according to the Nepali authorities.

The following morning, Bhogendra's coffin is lifted out of the plane.

For the next eight hours, the truck stops only once.

The nephew Jageshwar Ram (35) has been given the task of transporting Bhogendra Mochi home to the village where he lived.

– They call us all the time, he says.

His wife and children are waiting at home. They tell the nephew to hurry. The family must be cremated today.

The driver eats his food. The meal is over in 15 minutes.

For him, this is pure routine.

Every month, the driver transports eight to nine dead migrant workers, he states.

15 other drivers have the same task.

– Sometimes we have too much to do. Then we have to call for more people, he says.

We are approaching the village. The driver turns on a blaring siren.

He will announce that we are coming.

Darkness has descended in the south-east of Nepal. It is 7 pm in the small village of Golbazar. The truck crawls calmly down a bumpy, narrow dirt road. 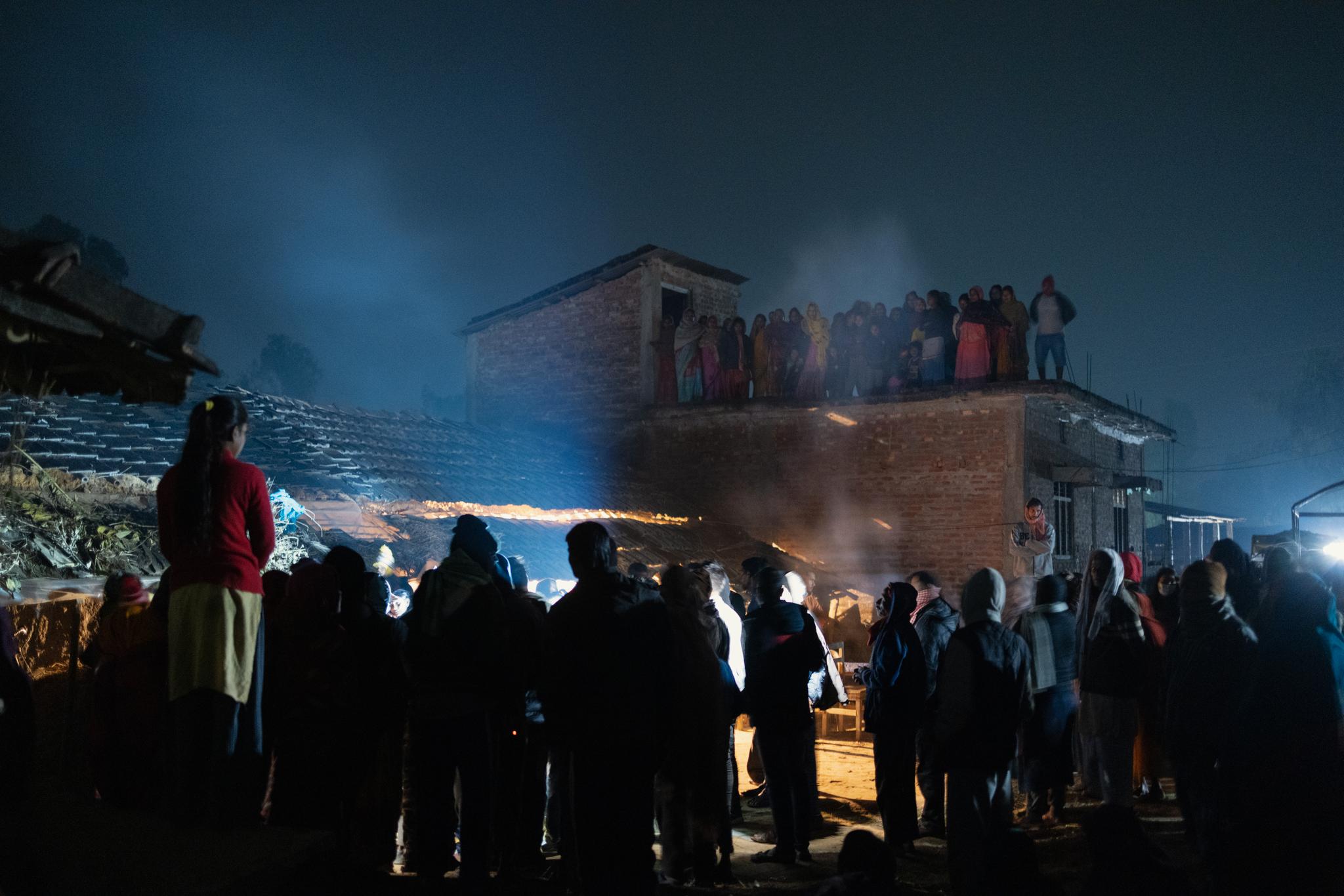 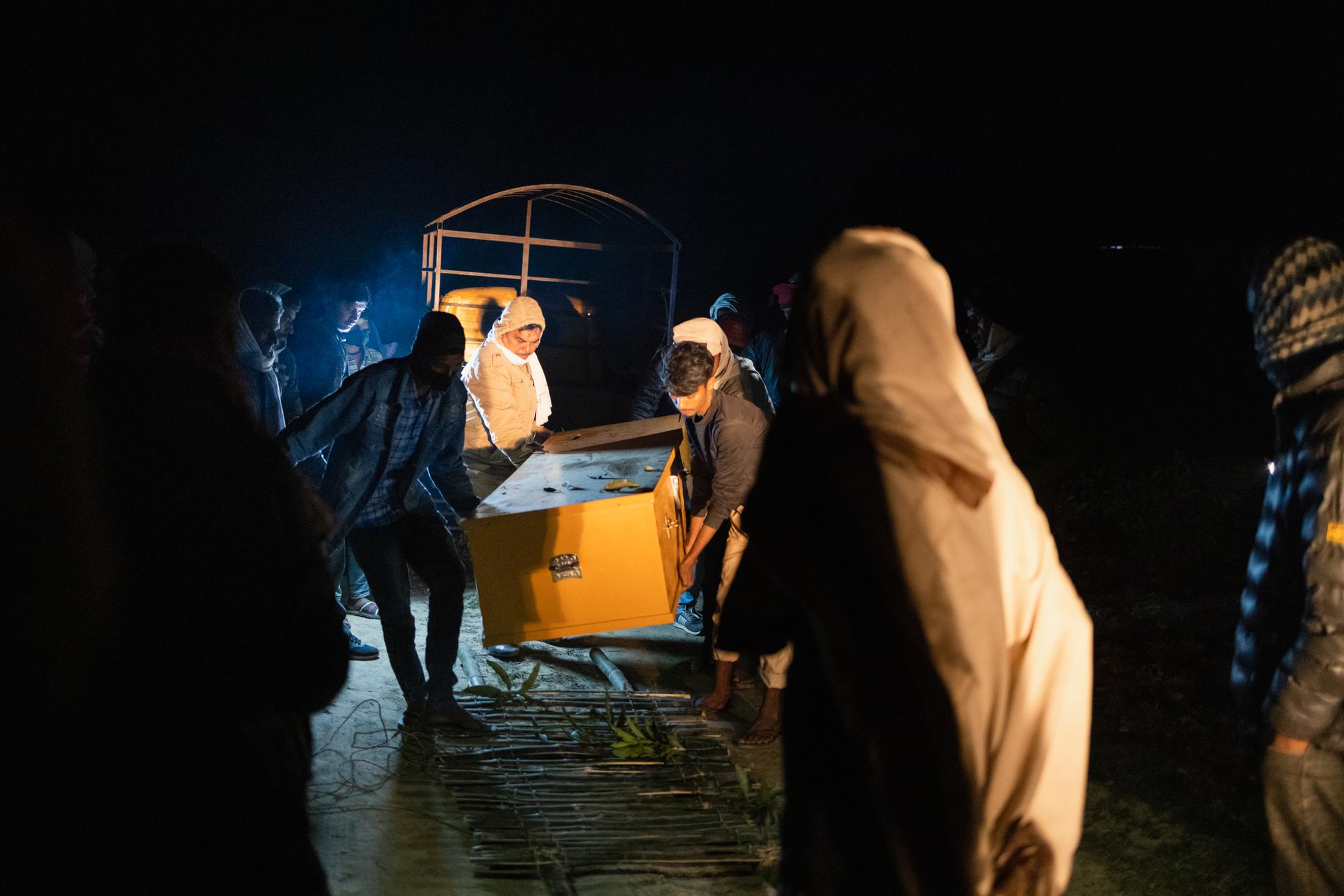 From the side of the road, the children stare at the truck with the coffin. We hear crying.

Around a hundred people have gathered in the pitch darkness.

The coffin is carefully lifted off the loading platform.

Then the lid is removed.

Tara, now a widow, needs to be supported to stand upright.

– People are worried, we learn from someone who has come forward.

– Nobody knows how the family will be able to take care of themselves in the future.

All the men VG talk to in the village have been migrant workers.

Last year alone, 1,242 people from Nepal died while working abroad, according to the Nepali authorities.

The deceased is wrapped in a linen blanket. The face is peaceful.

His son Raj Kishor Ram (18) stands next to the coffin.

He seems concentrated. Prepared for what will happen.

The dead person is placed on a homemade stretcher made of bamboo.

Friends and family carry the coffin the last way down towards the river.

Out on a large field, the wild dogs howl, like wolves in the dark.

The dead must be cremated on the riverbank, in accordance with Hindu custom.

After the cremation, the ashes are usually spread over the river.

The men of the village have not seen Bhogendra for two and a half years.

Now they dig a pit for the fire - and fill it with sticks and hay.

The deceased family man is carefully lifted over to his final resting place.

Then the fire is built.

The ritual is about hygiene, not religion, says one of those present.

The animals in the area must not be able to dig up the remains.

And when the fire goes out, the ashes will take the shape of the deceased's body, the man explains.

Bhogendra's son, Raj, knows what is expected of him: 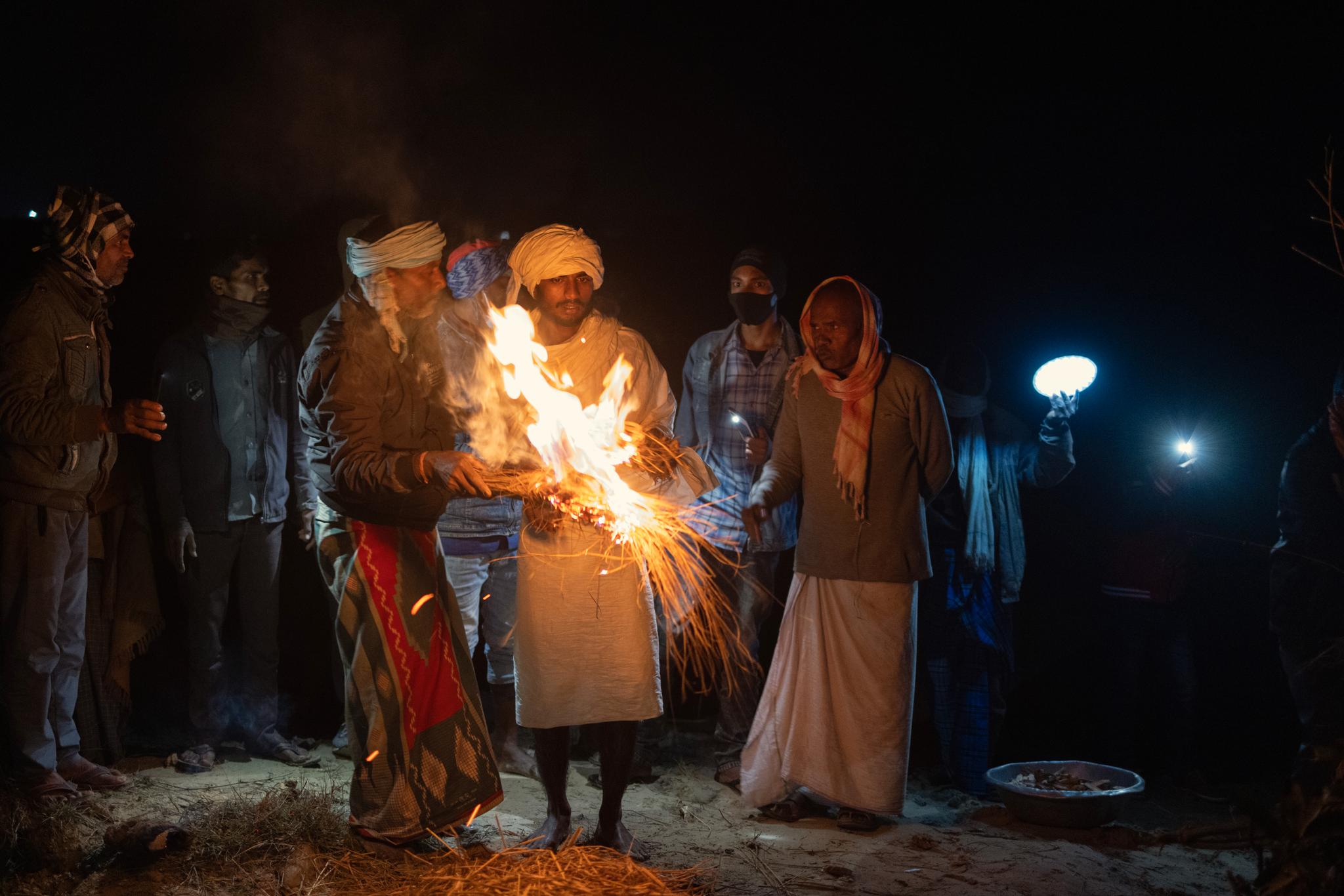 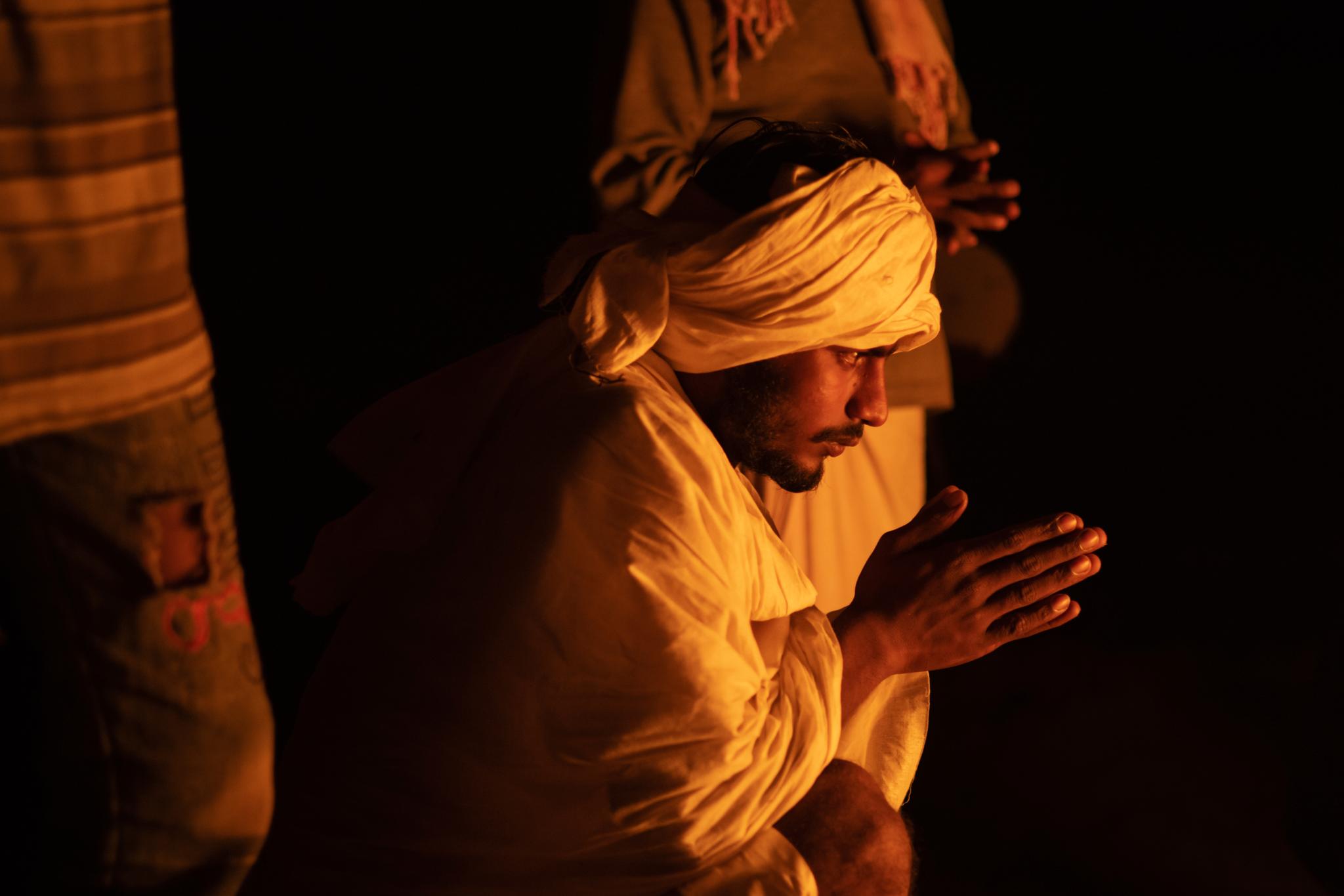 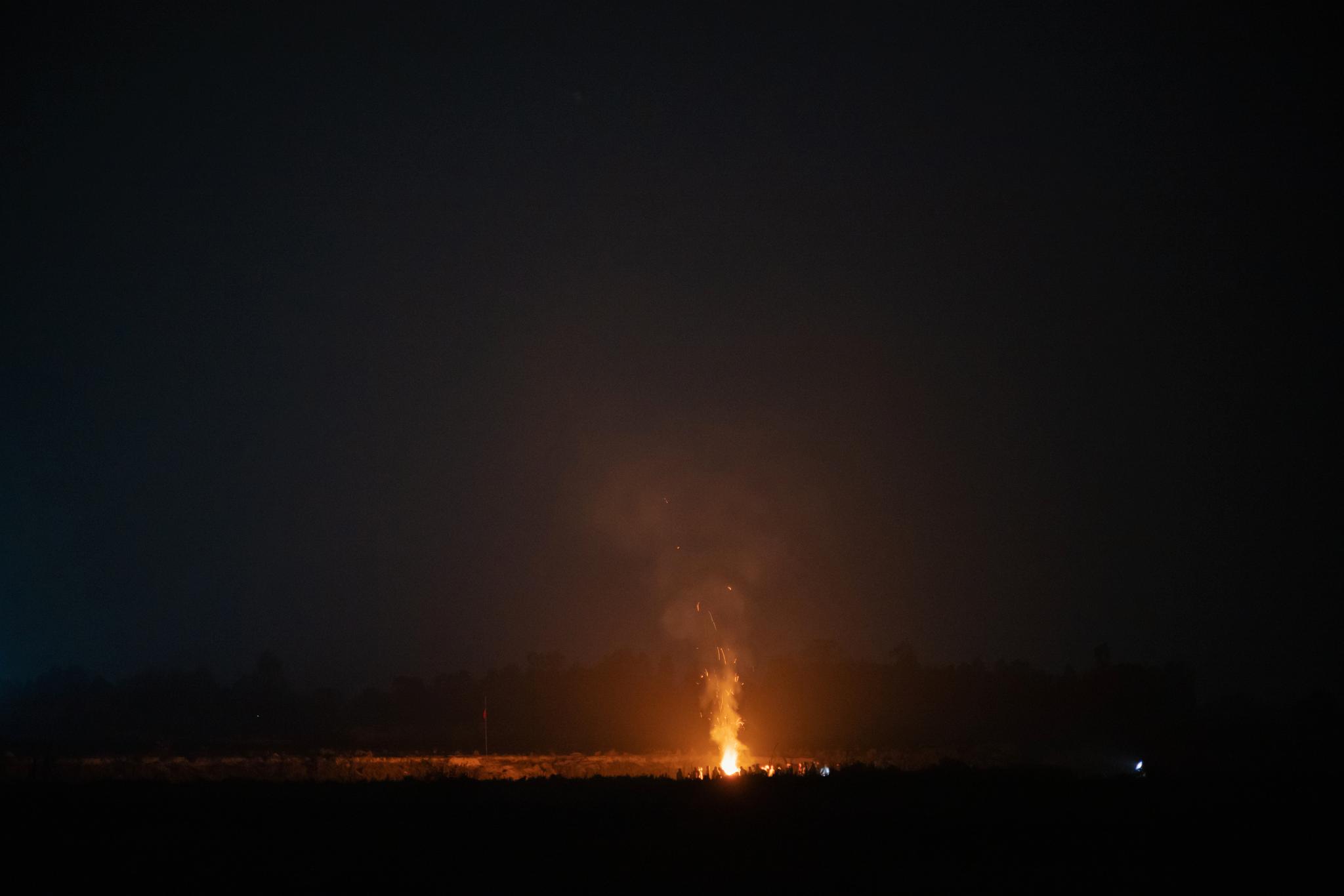 He gets a bundle of burning straw - and sets fire on his own dad.

The son sinks to his crouch and watches the fire grow stronger.

Three years after dad left for Qatar, he has returned home.

It's morning. Yesterday there was chaos, today it's just quiet.

A cow is tied to a fence outside the family's house. Children play in the dusty street.

VG is shown through the spartan house and out into a backyard.

But she would like this story to be told.

Son Raj is also there.

– It is completely remote for me to watch the football World Cup. I have to work and earn money, he says.

The son works in the village. He gives the daily wage of NOK 25 to his mother. He keeps 60 øre, which he can spend on himself.

He knows he has to go abroad to work. Preferably to Dubai or Saudi Arabia, he says. He is angry at Qatar.

– I have to go. We have to arrange weddings for my sisters, says Raj.

This is expensive in Nepal. It is expected of the bride to bring gifts into the marriage. Raj talks about a motorbike, gold and other jewellery.

– What do you think about becoming a migrant worker, after what happened to your father?

– I just have to solve the problem somehow. There are so many problems, says the 18-year-old quietly.

Now the mother falls backwards. She lies down on a carpet on the brick floor.

The young widow has fainted.

An elderly woman arrives. She holds the passed out woman by the nose and mouth. It makes her wake up, they say.

– Bhogendra said I should look after the children. Then he would earn the money for our family, she says.

Tara describes her husband as kind. He did not touch alcohol or tobacco.

– I am angry. Angry at Qatar. Angry at the company he worked for. The man who made our money is dead.

The spouse earned between NOK 3,500 and 4,000 a month as a construction worker in Qatar.

Once a month he sent money home. But last autumn there was a complete stop. Bhogendra went four months without pay, she says.

The husband's employer in Qatar denies this to VG.

– Some companies are OK. Others treat us like dogs, says one.

In Doha, there is no break at the construction site where Bhogendra worked. 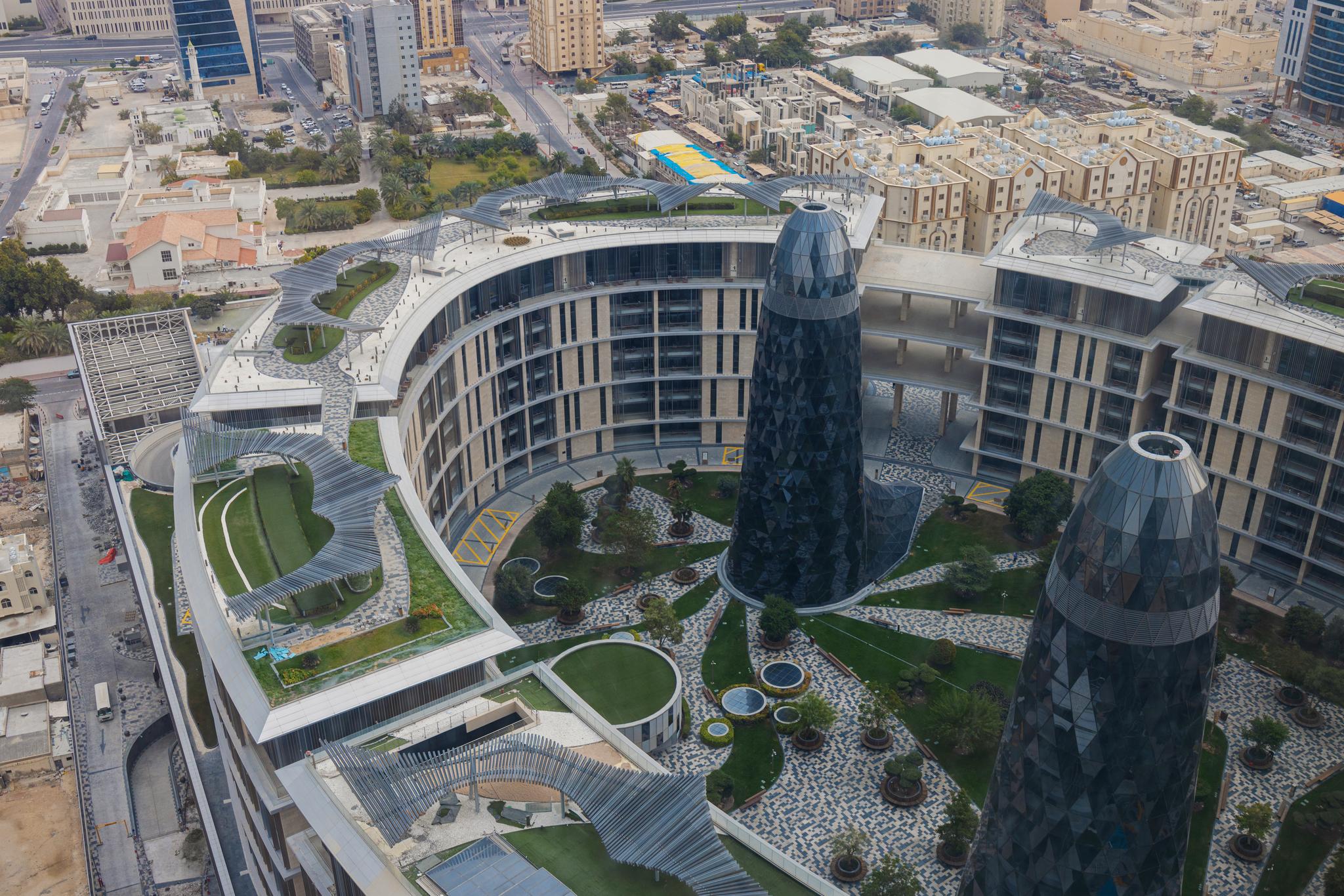 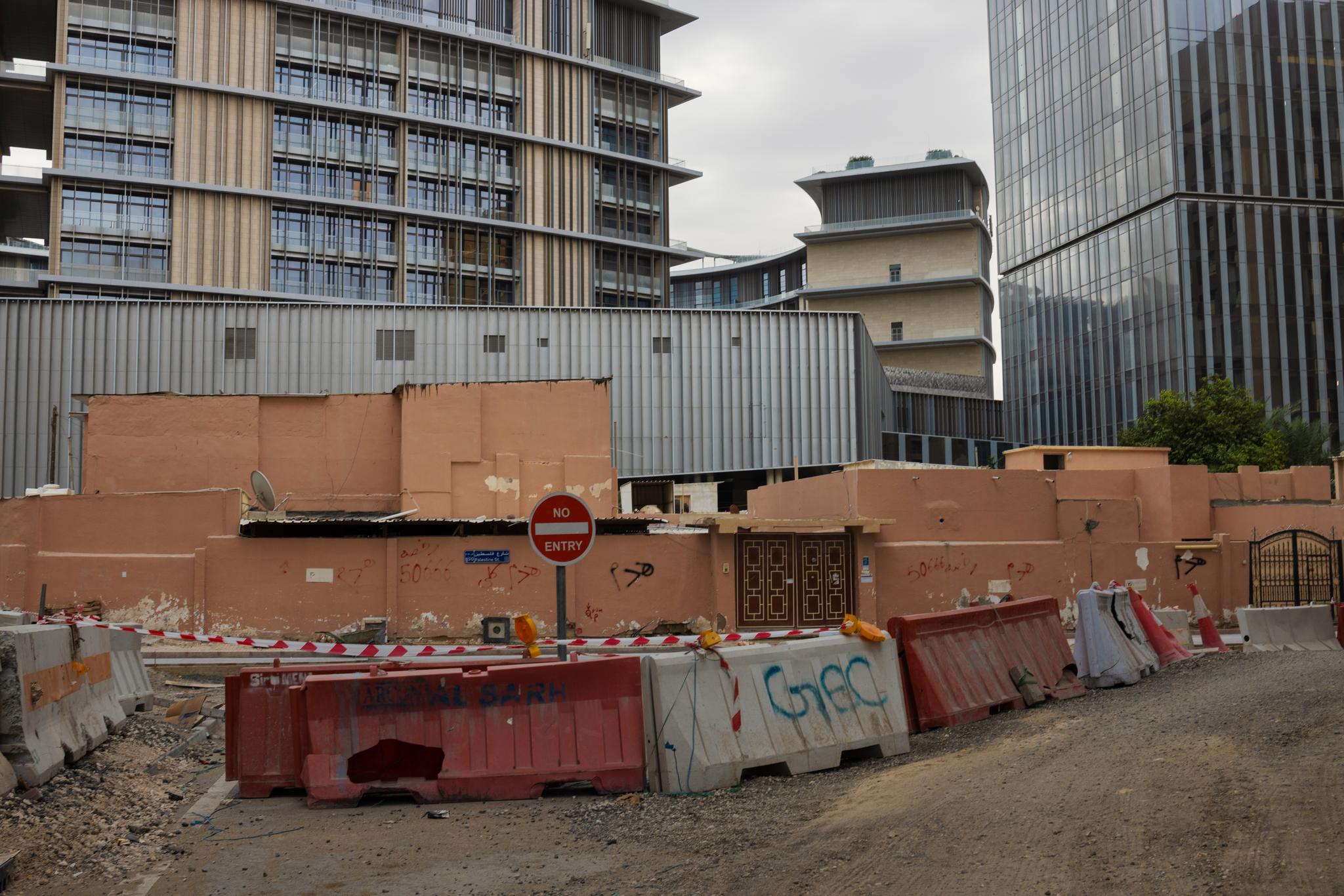 Several witnesses say that the 44-year-old fell. That it was a work accident.

The employer believes that the death was due to a collapse.

The company Bhogendra worked for, IMAR Trading and Construction, is among the developers of a mammoth 470,000 m2 hotel and shopping mall complex in downtown Doha.

– Bhogendra was on the second floor. He collapsed on the stairs on the way down to the first floor, writes HR manager Bassel Fakhreddine in IMAR in an email to VG.

He states that Bhogendra was quickly taken to hospital, but that his life could not be saved.

The police were on the scene, investigated the incident and concluded that the death was not work-related, writes IMAR to VG.

According to the HR manager, Bhogendra earned NOK 2,400 a month.

The employer has now paid compensation to the family, although the company is not obliged to do so, since the death is defined as «natural».

The UN agency ILO, which works in Qatar in collaboration with the authorities, confirms that falls from heights are the most common cause of death at workplaces in Qatar.

– Construction work is dangerous here, as everywhere else. This is where we see the most serious injuries. It is a big problem and we are concerned about it, says Max Tuñón, ILO's head in Qatar, to VG.

The conditions for Migrant workers have gotten better in recent years, he claims:

It has become easier to change employers. The authorities have established labor courts. And the minimum wage is now written into the law.

Many employers fight against this. Strong forces in Qatar are working for a reversal, state both the ILO and Amnesty to VG.

– It is a completely different world after the changes in the law. But there is still a bit left to be done, says Max Tuñón.

For twelve years, Qatar has been preparing for the football World Cup. The country's goal is to shine before the whole world.

– No other country has come so far with a working life reform in such a short time, the authorities recently stated, adding:

– The authorities are committed to working constructively with international partners and critics to continue to improve conditions for all migrant workers in Qatar.

They have lost a father and a husband.

Gone is also a stable income and faith in the future.

– Within a year, I also have to travel abroad. Whether I'm scared or not doesn't matter, says Raj (18).